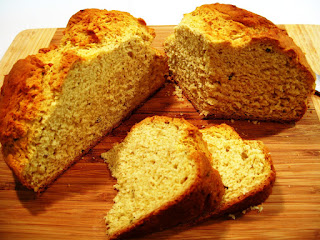 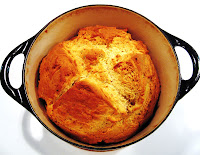 Soda bread uses a chemical leavening, meaning rises due to an acid-base reaction. Soda refers to the base used, baking soda. Different from traditional bread, that uses sugar and yeast (single cell organisms) to produce carbon dioxide gas and ethanol (drinking alcohol). Neither one I would imagine sounds appealing to the home cook, but are critical for fluffy, good baked goods. Both work well and have their own set of pros and cons. Chemical leavened bread does not require time to rise. The reaction starts immediately upon mixing with water and continues while baking. Therefore, the dough must get baked shortly after mixing. Soda bread requires relatively immediate baking or the reaction ends and looses the lift before baking. Buttermilk contains lactic acid which reacts with the baking powder (sodium bicarbonate). Baking powder added too for additional rise, which never hurts in gluten-free baking (notorious for being dense). Baking powder consists of a perfect balance of a protected acid of tartaric acid in form of a salt and sodium bicarbonate (baking soda) that react once it hits moisture. Another byproduct of this acid-base reaction is salt, therefore the salt in the recipe is minimal.
Soda bread lends itself to a more hearty bread, more wholesome than a traditional yeast bread. Growing up, in the Swing household, soda bread was simple and straight forward with no fruit of any kind and usually had wheat and/or oats. I do not oppose the addition of fruit. Sometimes I think it works, especially if eaten solely with great quality Irish butter. I remember traditional soda bread being slightly bitter, and I wanted to add millet with the sweet cereal flavor it imparts. Yet, keep that hardiness with the addition of brown rice flour and flaxseed meal. Flaxmeal also creates this wonderful gel, which aids in building structure to gluten-free bread, as well as adding omega-3 amino acids. I tried to make this bread without the use of any gums, but to no avail. This recipe is delicious! Soda bread is best eaten with one to two days of baking. Remember, for best results, make this recipe using weight.
Ingredients:
Directions:
Preheat oven to 375oF. In a small, microwave safe bowl, combine the flaxmeal and water. Microwave for 30 seconds. Stir and allow the thick gel to cool. In a large measuring up, whisk together the buttermilk, eggs, rosemary, and raisins/currants (if using). In the work bowl of a stand mixer or a large bowl, scale the rest of the dry ingredients: the potato starch, cornstarch, brown rice flour, millet, guar gum, baking soda & powder, salt, and sugar. Mix on low with a paddle mixer or whisk until uniform. Slowly mix in the buttermilk + egg mixture, followed by the flaxmeal gel. Mix for about 2 minutes; the dough should come together and be uniform. Turn into an oiled small/medium dutch oven or heavy walled sauce pan (at least 2 quarts). Smooth out top and cut an X or a cross on the top with a knife. Spray the top lightly with oil. Bake for about 35-45 minutes. Check for doneness by toothpick; if comes out clean, it is done. Allow to cool. Cut into slices as desired. Best served with butter. Seal any remaining bread well. Best if eaten with two days of baking. Happy St. Paddy's Day!
-Erin Swing
The Sensitive Epicure
Posted by Erin Swing

Yum! Also thanks for the explaination on baking powder vs. baking soda! Very helpful!