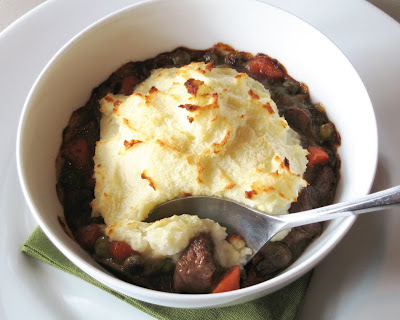 Eight years ago, almost to the day, I was diagnosed with Celiac. A higher number of Irish seem (compared to other nationalities) to be plagued by gluten-intolerance/Celiac. Apparently, the Irish have conspiracy theories involving the English. The leading theory was due to the English shipping all the wheat out of Ireland at one point, so the Irish people never got used to eating it. For whatever reason, I had for come up with a couple of easy substitutions to make Shepherd’s pie for St. Patrick’s Day. This was my duty as an American-Irish girl. With the recent gluten-intolerance diagnosis at the time, I found it to be daunting. The year before, I found myself eating the most incredible Shepherd’s pie, better than my mother’s, at a pub in the Boston area. My mother, bless her soul, in my eyes was the most incredible cook ever. While growing up, she hosted fancy dinner parties, cooking through Julia Child’s cookbook (that was a long time ago). Back to this new-found Shepherd ’s pie benchmark, I found at Matt Murphy’s Pub in Brookline. At first, it looked ordinary with a browned topping of mashed potatoes. Once I dug in, I could see chunks of stew meat and rosemary. This is the version I had to reproduce. In my mind, the ultimate Shepherd’s pie is a base of tasty lamb stew with lots of rosemary topped with browned creamy mashed potatoes. The only two components that are not gluten-free are the flour and beer. Easy substitutions as I will get to below. Drink a gluten-free beer with it. Green's Endeavour makes dark ale. Brewed in Belgium, it does not quite resemble an Irish Stout beer, but it is close enough.

Stew:
Season the potato starch well with salt, pepper, and cayenne in a large mixing bowl. Toss the lamb with starch mixture in bowl, until evenly coated. Warm a large, 12”, skillet and add oil over medium-high heat. Brown the meat in the skillet, until the coating is browned on both sides. Do not overcrowd or will not brown well. Split into two batches if needed. Remove from heat. Place the seared meat and gluten-free beer into a slow cooker or a large (3-4qt) heavy sauce pan; put on low heat. Cook onions in the skillet on medium heat until transparent; remove and add onions to meat. (For cutting the carrots into small obliques, cut carrots at a 45 degree bias, quarter turn it towards you so the cut side faces up, cut again at 45 degree right through the middle of the cut face. Quarter turn it again and repeat the process: video.) Add the carrots, mushrooms, tomato paste, bay leaves, and half the rosemary to the lamb and onions and stir until thoroughly mixed on low heat. Cook covered with occasional stirring for at least 2 hours. 30 minutes before removing stew from heat, add in the peas, the remaining rosemary and thyme. Taste for seasoning, adding in more salt and pepper as needed.

Whipped Potatoes Topping:
Peel potatoes and cut into 1” cubes. Boil with salt until tender, about 15-20 minutes. Drain potatoes well. Place potatoes into a large mixing bowl and add in butter by small pats, while potatoes are still hot. Using a hand-mixer beat the potatoes on low until smooth. Add in any remaining butter, salt, and white pepper to taste. Increase mixer speed to medium speed, and beat until smoother. Slowly all milk with low mixing speed; increase mixing speed to make fluffy. Add more milk if needed to make creamier.

Assembly:
Turn on broiler. Using oven-safe casserole dish (individual soufflé dishes or 1 large dish), place stew to fill dish half full, and smooth out making sure it is evenly distributed. Place potatoes on top and carefully spread out to cover the top of the stew. Sprinkle with chopped parsley. Place under broiler for about 5 minutes, until potatoes are lightly browned.