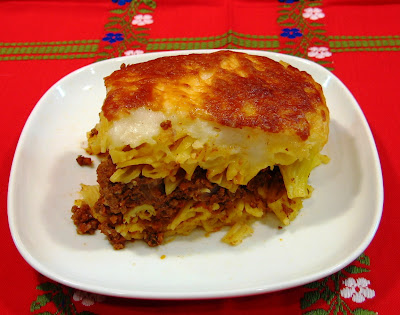 At any restaurant in Greece, you can find pastitsio. Pastitsio is a baked pasta casserole with a meat and tomato sauce and covered with a béchamel sauce. I clearly remember having pastitsio before going gluten-free and it was so good.

Pastitsio sounds simple and basic, but it can be very difficult to find in most American-Greek restaurants, let alone a gluten-free version. Now, when I travel back to Greece with my husband to visit his family, he explains my gluten-free needs in Greek while ordering for me at restaurants. More times than not, the Greeks respond, “She cannot eat pasta or bread?! What can she eat?” But I have never gone hungry in Greece.

More Greek dishes than not are naturally gluten-free. However, there are a handful of traditional Greek dishes that I occasionally long for that are filled with gluten. Greek cuisine is similar to Italian in regards to having standardized recipes that they have been using for hundreds to thousands of years. One of which is pastitsio.The gluten-free version is no more difficult to make than the standard version. The key as always is sourcing the best ingredients. I cannot stress the importance of using the best gluten-free pasta possible. My favorite is Italian corn pasta; Le Veneziane is the brand I stock up on. If you have a corn sensitivity, rice pasta works but it is imperative not to overcook, cooking to right at al dente.

Pastitsio is traditionally made having a bottom layer of tubular pasta (bucatini, rigatoni, penne); topped with a layer of cheese to bind it all together; a middle layer of meat tomato sauce with oregano, cinnamon, and egg whites; plus another layer of pasta; and a top layer of an béchamel sauce with cheese and eggs known as an enriched Mornay sauce in the culinary world. During Easter, most Greeks serve pastitsio with the traditional lamb spread. That can be slightly hedonistic. A perfect side for pastitsio is salad: a traditional Greek Salad or a spring greens salad.

Ingredients
For the meat sauce:

For the béchamel sauce:

Directions
For the Meat Sauce:

Heat the olive oil in large skillet and sweat the onions with the garlic over medium heat until almost translucent. Add in the ground meat and sauté until browned. Add the remaining ingredients except for the egg whites. Let the sauce simmer for about 10-15 minutes, while tasting the sauce to seasoning. I always add in a lot more oregano than called for. This sauce is best when it is seasoned assertively. Turn off the heat and stir occasionally until cooled, but not too hot that it would cook the egg whites. Stir in the 2 egg whites thoroughly, reserving those egg yolks for the béchamel.

Melt the butter in a large heavy saucepan over medium heat. Add the potato starch and whisk for about 1 minute. Turn the heat down to low/simmer. Add the hot milk all at once and whisk until the sauce is thickened and smooth. Add salt, ground white pepper, and ground nutmeg to taste. Remember, there should be only a hint of nutmeg. Remove from heat and add in about 1 cup of grated cheese and stir until smooth. Allow to cool slightly with occasional stirring. Add in the slightly beaten 2 egg yolks plus 2 whole eggs into the béchamel and mix until it is all completely incorporated.

Bring a large pot of salted water to boil. Add in all the pasta at once. Cook with stirring occasionally, especially at the beginning, to prevent sticking. Cook until al dente, tender yet firm. Drain well and return to pot. Add in butter and stir in.

To serve, preheat the oven to 350 degrees. Spray a very large and deep pan (lasagna pan or disposable aluminum pan) well with non-stick spray. Evenly distribute half of the pasta in the bottom. Sprinkle about half a cup of grated cheese evenly on top. Then evenly pour the meat sauce as the next layer. Followed by the remaining pasta. Pour the béchamel over the top evenly. Sprinkle the remaining half a cup of shredded cheese on top. Bake for approximately one hour or until the top is lightly browned. Remove from oven and allow to sit for at least 15 minutes before cutting and serving.

Aah, I love this dish but I never knew what it was called!! Thank you so much! I'll definitely be making this soon. (I've never tried making anything like a béchamel sauce though...this will be interesting...) That picture looks so delicious.