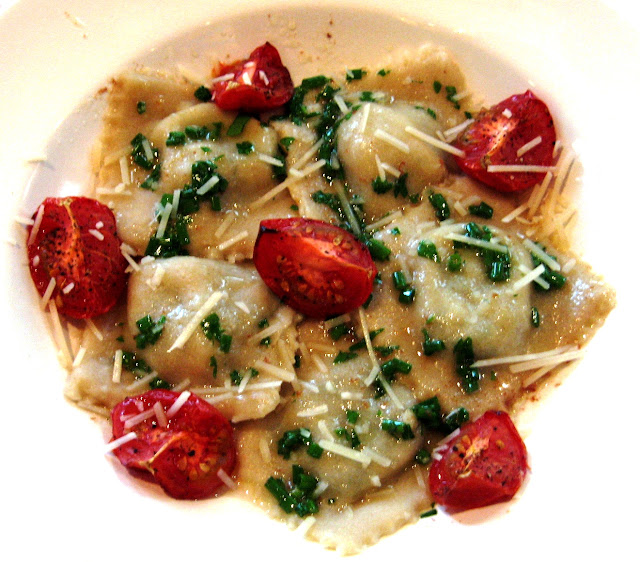 This month for the Gluten-Free Ratio Rally, Jenn of JennCuisine (our lovely hostess this month), gave us the mother of a challenge: fresh GF pasta.  Pasta is one of those items that really relies upon the formation of gluten to give the critical physical characteristics of making pasta: strength; flexibility; plasticity; and elasticity.  Without having these qualities, it is near impossible, downright frustrating to make pasta with all the manipulation needed to form the pasta in desired shapes.  Hence, I created some tricks to cobble together some decent GF pasta in form of a ravioli.

My stepfather was an "Old German Jew" who was a self-proclaimed "Born Again Italian."  (This become a joke amongst his "OGJ" bridge group.)  He spent two years traveling around Italy to womens houses learning how to cook the traditional Italian culinary repertoire.  By default, I became his sous chef.  This was years become I was diagnosed with my gluten intolerance.  We spent hours at time making pasta in all forms, including raviolis which were my favorite.  To me, any filled pasta is like a surprise.  You never know exactly what you are going to get.  And considering the simplicity, there is no need for any heavy, over complicated sauce that could easily overwhelm the raviolis.  Based on what I have in my kitchen, the filling I made had shrimp, spinach, mushrooms, and goat cheese.  The only sauce that was a good match for this ravioli would be a browned butter with fresh herbs.  And roasted tomatoes to add some additional color, complexity, and nutritional aspects to the plate.

According to Michael Ruhlman's Ratio, the fresh pasta is 3:2/flour:eggs.  While in Gisslen's Professional Baking, the ratio for fresh pasta is 8:5/flour:eggs.  Remember ratios are based on weight, the only accurate way to cook (gluten-free or not.)  Which is foundation of the GFreeRally as started and explained by Gluten-Free Girl here.  Based on my experience with GF baking, I know that elasticity, plasticity, strength, and flexibility can be achieved by gelatinizing the amylopectin in certain flours by treating with boiling water.  My favorite flour to achieve this is sweet/glutinous rice (which is gluten-free, but named so because of its characteristics, therefore my pasta ratio will differ because of this, obviously in the reduction of eggs used.  I still feel as though I could better optimize this recipe to make up to what I consider ideal.  This recipe works well, and tastes great considering it is gluten-free.  You know how I operate, that is not good enough; I want my recipes to be home runs regardless that it is gluten-free.  My final ratio for this pasta was 8:3:2/flour:liquid:eggs, or if I combine the liquid + eggs, the ratio is 8:5/flour:eggs which matches up with Gisslen.

filling:
In a medium saute pan, heat the olive oil over medium heat.  Add in the shallots and mushrooms.  Sweat with frequent stirring.  Add in the spinach, salt, pepper, and thyme; stirring frequently until spinach is completely wilted.  Allow to cool.  Taste for seasoning, add more if needed.

Transfer to a bowl.  Add in the raw minced shrimp, mix thoroughly, followed by mixing in the yolk completely, lastly adding in the goat cheese.  Cover and put in fridge until ready to assemble raviolis.

pasta & assembly of raviolis:
In the work bowl of a stand mixer weigh in the sweet rice flour.  Use paddle attachment, preferably with a scrapper.  In a separate medium bowl, measure and combine the brown rice flour, oat flour, and salt.  In another container, gently scramble the eggs.

Turn out dough to a clean, floured (sweet rice flour) surface.  Knead, making sure the dough is homogeneous.  If it is sticky, add in barely enough sweet rice flour so it is easier to work with.  Since it is gluten-free, there is no need to let the dough (gluten) relax.  Cut the dough into 4 even pieces with a bench scrapper.  Set the rollers of the pasta (sheet) attachment at the widest opening (1.)  Roll the pasta into very thin sheets.  The thinner, the better without cracking or forming holes.

Over half the rolled pasta, make small mounds of the filling, depending on size of raviolis, allowing space for a sealed frame of pasta.  I used a large rectangular ravioli cut out.  You can use a round one, cookie cutters, ravioli cutter, or if all else fails, a pizza cutter.  Carefully paint a thin layer of egg wash around the filling to act as glue between the layers of pasta.  Lay the other piece of pasta (whole sheet, or individual piece depending on strength of your dough) over the top and press down between the mounds of filling to seal well, removing any excess air.  Cut out and lightly dust with extra flour if needed.

In a large pot of salted, boiling water, add in about half the raviolis.  Boil for a total of 7-8 minutes until fully cooked.  I split the raviolis into two batches.  Meanwhile, make the browned butter sauce.


sauce & assembly:
In a large saute pan over medium to high heat, add in the butter and stir until it becomes browned.  Turn down heat to low.  Add in the herbs and salt, if needed.

Once the raviolis are cooked, strain and add to the browned butter pan.  Gently toss until coated.  Serve immediately.  I garnished with parmesan and roasted tomatoes.

For a complete wrap-up of this month's #GFreeRally (on Twitter), go to our host for July, pasta, Jenn of JennCuisine. Want to know more about gluten free pasta ratios creations? Check out all the posts by the participants in the Gluten Free Ratio Rally!


Brooke from B & the Boy! made Ravioli w/strawberry filling and chocolate berry sauce
Caneel from Mama Me Gluten Free made Multi-grain fettuccine
Charissa from Zest Bakery made Linguini with smoked salmon and creamy vodka sauce
Erin from The Sensitive Epicure made Ravioli w/ shrimp, spinach, mushrooms, & cheese filling in browned butter
Gretchen from Kumquat made Vegetable lasagna
Jenn from Jenn Cuisine made Tagliatelle with smoked salmon, peas and parmesan
Lisa from Gluten Free Canteen made Lokshen kugel
Karen from Cooking Gluten Free made Homemade gluten free pasta
Mary Fran from Frannycakes made Pasta with pink vodka sauce
Meaghan from The Wicked Good Vegan made Vegan gluten-free homemade pasta, in creamy artichoke tagliatelle
Meg from Gluten-Free Boulangerie made Fettuccine with sun-dried tomatoes
Pete and Kelli from No Gluten, No Problem made Tortellini
Rachel from The Crispy Cook made Smoked paprika noodles with garlic scapes and herbs
Shauna of Gluten Free Girl made Gluten free fresh pasta
Silvana from Silvana’s Kitchen made Lemon-poppy pasta with tomato, corn and basil
Tara from A Baking Life made Fazzoletti with wild mushrooms and spring onions
TR from No One Likes Crumbley Cookies made Tomato basil pork raviolis
Be sure to join us next month, when Kate from Gluten Free Gobsmacked will be challenging us to make cake!

Erin, your approach is wonderful. Loved the scientific analysis at the beginning. Thanks for contributing this to the gf ratio rally! It is mouthwatering!

wow this is really interesting! I would never have thought to add in boiling water before hand to activate the gelling of the starches, what a great idea! I did notice that after cooking mine they were much less fragile than before cooking, and figured that was because of the starches gelling up, but genius to add that step in!

Erin, I love the flavors you incorporate into the ravioli. Oh yum! And I loved reading about you and your father. I agree with Jenn, my pasta was def. less fragile after cooking - what a great idea to gel it up some with the hot water while making the dough!

I too really appreciate your scientific approach to the Rally. The boiling water idea makes perfect sense when I think about it, but it's something I never would have come up with on my own! Great job, and also your filling sounds divine.