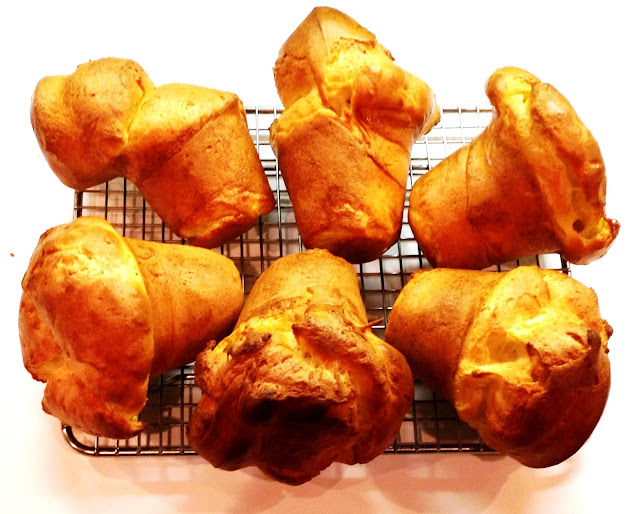 For this month's Gluten-Free Ratio Rally, Mrs. R of Honey From Flinty Rocks chose popovers. Ah, popovers were a childhood staple in my house. My mother would make a pot roast with popovers on a regular basis. I would sop up the gravy with torn up popovers. I remember my mom's popovers as tall, popping well over the pan, crisp on the outside with a thin exterior, and an almost custard-like interior with lots of nooks and crannies. Perfect to use as a gravy vehicle. Makes sense, considering the English's equivalent is called Yorkshire pudding served alongside with roasts and gravy. Yorkshire pudding is traditionally baked in muffin tins. There is a very specific bake ware pan for popovers, that I find is worth the money and space. The popover pan is tall and thin, giving more rise to popovers. Hence, the name. 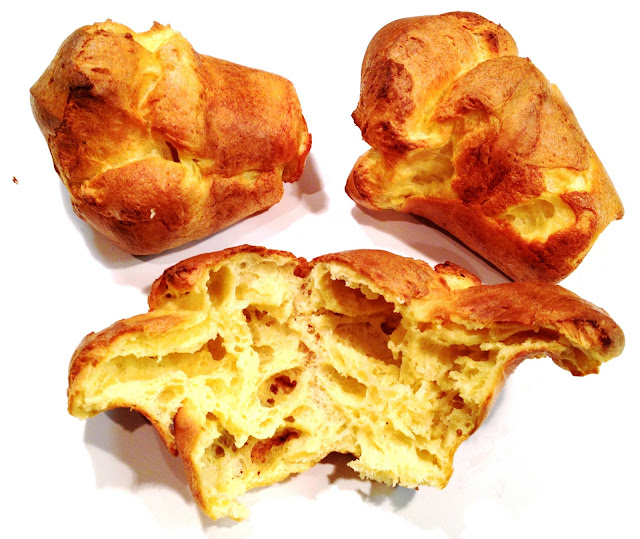 Using some ingenuity based on trial and error from my baking experiments, I applied the pate a choux method to my popovers with incredible results. These popovers are identical to my mother's and gluten-free! They popped over, have an incredible golden color with a delicately crisp exterior, and an interior that is tender with almost a custard-like texture without being gooey. A like piece of nostalgic heaven for me. Now where's that pot roast?

The Gluten-Free Ratio Rally is a group of GF bloggers, rallied by Shauna of GlutenFreeGirl.com, where we put our on spin a a culinary standard. These culinary standards are known formulas, ratios, that professionals use. The caveat is that everything is done by weight, since weight is more standardized and much more accurate than measuring by volume. This is the foundation of the GFreeRally as started and explained by Gluten-Free Girl here. The book that we base our ratios is Michael Ruhlman's Ratio. Ruhlman's popover ratio is 1 flour : 2 liquid : 1 egg. Mine turned out to be 1 flour : 2.5 liquid : 1.5 egg. For reference, the pate a choux ratio is 1 flour : 2 liquid : 2 egg : 1 fat. In essence, the popover batter can be liquid since it will be contained my the pan. Allowing for more rise. I found that since I cooked the flours with the liquid, it absorbed more than expected, and needed more eggs for the rise and structure as well as more browning. The flours used were sweet rice flour and brown rice flour with a high level of amylopectin, giving more elastic properties. I swapped out 1 whole egg for 2 egg whites to give more drying properties to the batter, or else it could easily be gooey with the sweet rice flour's gelatinous nature. Only a teeny bit of fat is used in the popover batter This recipe can be easily converted to dairy-free by swapping out the milk for your choice of broth and the fat for lard, rendered chicken or bacon fat, shortening, etc. Technique is everything with this, so please follow instructions exactly for best results.


directions:
Preheat oven to 425F. May want to error on safe side and turn up to 450F, if your oven doesn't heat well. The hotter, the better.

In a medium saucepan, measure the butter, salt, seasonings, and milk. Place over medium heat. In a small/medium bowl, measure out the sweet rice and brown rice flours and mix well. Once the liquids come to a roaring boil, pour in the flour mixture all at once and stir constantly and thoroughly for a couple of minutes, it will be a pasty, elastic mess. Turn all the dough into the bowl of a stand mixer equipped with a paddle attachment (I used the one with the rubber blades) and immediately turn on lowest speed. In a small/medium bowl (preferably something with a spout), mix the eggs well. Make sure they are no colder than room temperature. Once the batter in the mixer has cooled off to just warm/hot, just cooled off enough to put hands on exterior of bowl, add in about a quarter of the egg mixture. Allow time for the eggs to incorporate. Repeat in about 4 additions until all the eggs are added.

Grease popover tins or every other cup of muffin tins (to allow room for expansion). Fill about 1/2-2/3 full. Bake at 425F (220C) for about 30-40 minutes. Before removing them from the oven, be sure the popovers are dry and firm enough to avoid collapsing. Remove from pans immediately and place on wire rack to cool.

Head on over to Mrs.R's host post to see her amazing popovers and all the other fantastic recipes brought to you by rally participants this month! Thanks again Mrs. R for hosting a popover of a challenge! Also, if you're on Twitter, search #GFreeRally

Erin, your popovers are gorgeous! I've always made mine in muffin tins, but this post convinces me it's worth it to put a popover tin on my wishlist. Great job!

I knew your popovers would be fabulous based on your sneak peak photos, but DAY-YUM. :) Those popovers are perfect. Bravo! I might just have to tweak my own recipe to fit your ratio and see how they turn out.

I think Charissa stated it justly when she said DAY-YUM. My jaw dropped, and now there's craving for more popovers.

Erin, these are seriously popover perfection. I was thinking maybe following a pate a choux direction might help mine, I'm totally making your version next time!

Sigh, I was hoping mine would look like this and thanks to your techniques they might next time! Nice job conquering the challenge!

These are absolutely lovely! And I was happy with my little bit of popping over!

I am going to have to get me one of those pans...

yay for our resident rally chemist! these are textbook popover beauty... thanks for sharing them and all of the steps of how you got there. awesome.

Do have any suggestions for baking these at high altitude?

Do have any suggestions for baking these at altitude?

Now that is what a popover is supposed to look like! Definitely want to try these!

Erin! Those popovers are picture perfect! I love the way you discuss your rationale behind your choice of ingredients and use of the choux technique. So very helpful and exactly what the Rally is all about. Thank you for sharing!

For high altitude: depends on how high up you are... Since there is no sugar and no chemical leaveners (baking soda &/or powder), no worries there. If you wanted to be on the safe side, bake at 450F to ensure it sets. If you're above 5,000ft, you may want to add an addition egg white, and reduce the liquids by 30 grams. Hope that helps!