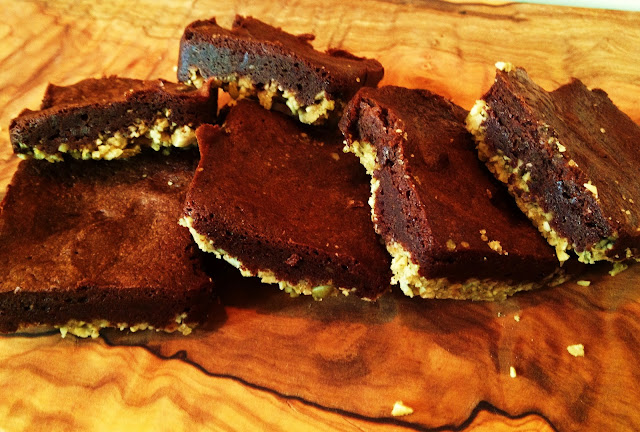 When I think of brownies, I think of dense, fudge-y, chocolate "cake" with that thin layer on top. I love that thin layer on top. So in developing a recipe for a complex brownie, I made sure nothing would be on top. What is that thin layer? People call it a meringue layer: the proteins from the egg whites combining with the sugar and migrating to the top during the baking process. However, I have seen this with vegan brownie recipes I have made. Maybe in general, a film of protein and sugar forming on top. A syneresis as I would call it as a scientist. (A good example is the liquid whey that separates out on top of yogurt.)

Mary Fran of FrannyCakes hosted this month's Gluten-Free Ratio Rally with brownies as the challenge. The Gluten-Free Ratio Rally is a group of GF bloggers, rallied by Shauna of GlutenFreeGirl.com, where we put our on spin a a culinary standard. These culinary standards are known formulas, ratios, that professionals use. The caveat is that everything is done by weight, since weight is more standardized and much more accurate than measuring by volume. This is the foundation of the GFreeRally as started and explained by Gluten-Free Girl here. The book that we base our ratios is Michael Ruhlman's Ratio. Brownies did not have a predefined ratio by Ruhlman. And since a major ingredient is chocolate with its many forms (solids and cocoa), chocolate needs a special ratio unto itself.

I decided to go the Mexican spiced chocolate route, using cinnamon, chilis, coffee, nuts, and seeds to add depth and complexity. But at first, I pondered, "How am I going to incorporate the seeds and nuts?" I know, make a crust. This will give a unique texture to the brownies without interfering with that special thin meringue layer and giving an emphasis on what I chose: marcona almonds and pepitas. The marcona almonds are skin-free and make it easier to work with. Given, the crust makes for more work and a double bake with crisping up the crust first, cooling, then adding in the brown batter. So. Worth. It. I bet you have never had a brown like this. My friends told me this is their new favorite. The ratio of these brownie were (roughly) 2 parts eggs : 4 parts sugar : 2 parts butter : 1 part cocoa powder : 0.6 parts flour.

Head on over to Mary Fran's host post to see her amazing popovers and all the other fantastic recipes brought to you by rally participants this month! Thanks again Mary Fran for hosting a chocolate-y delicious challenge! Also, if you're on Twitter, search #GFreeRally